Swimming with the Penguins? – January 6

Swimming with the Penguins? – January 6 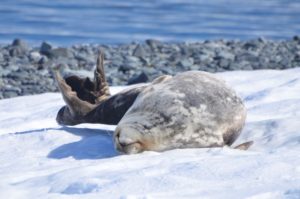 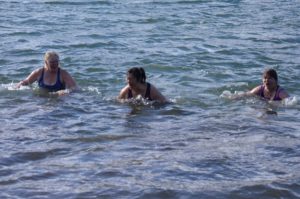 We arrived at Half Moon Bay around 8:00 a.m. under bright blue skies, temperatures just above freezing and little to no breeze. We stepped onto this island amongst thousands of chinstrap penguins breeding everywhere we looked. We did however also come across a Weddell seal sunning itself on the shore a short distance from where we were dropped by the Polarcirkel boats. After a few hours of exploring five members of our group who came prepared followed through with joining the growing tradition of swimming in the Antarctic waters before quickly drying off and heading back to the ship for a warm shower. 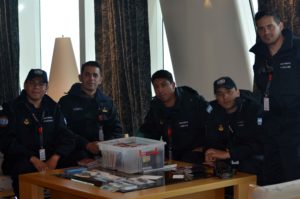 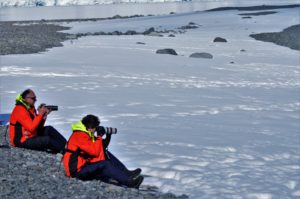 Half Moon Bay was also the location of an Argentinian Research Station and the five men stationed there joined us on board for lunch and then proceeded to stamp each of our passports with a special stamp from their station.

Yankee Harbour was our next stop which was actually only a few kilometres away. As we waited our turn to climb into the boats to make our landing we were entertained by two humpback whales feeding in the bay within less than 30 meters from our ship. It was fascinating to watch the two whales surface a few times and then breach for a deep dive to capture copious amounts of “krill” (similar to shrimp) before they surfaced again to repeat this impressive dance. 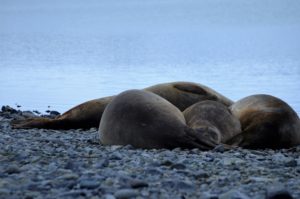 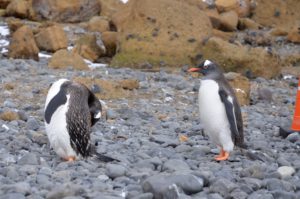 Once on land we hiked around the curved stone shoreline and located a group of elephant seals sleeping on the shore of a fresh water lake. We had a dedicated geo-cacher in our team who was busy locating two items at this site for her next cache that she enthusiastically documented. (Geo-caching in the Antarctic is an exclusive opportunity for those involved in the hobby) This was also an opportunity to get a close glimpse of thousands of newborn gentoo penguins amongst the widespread colonies occupying the shoreline and hillside.

The wildlife in Antarctica seems to be thriving thriving in some locations but the naturalists onboard the MS Fram advised us that they are witnessing and unfortunate decline of some species of penguins, seals and whales, of which climate change is potentially a factor.

What a privilege to be able to see these amazing creatures in their natural environment!