A day in Deception Island – January 7

A day in Deception Island – January 7 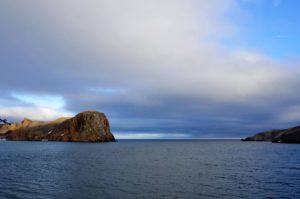 Through the narrow gate into Deception Island 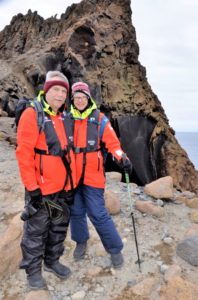 It was early in the morning when our ship carefully entered the narrow entrance into Deception Island which is actually an active volcano and uniquely, a volcano crater accessible by boat. The last time an eruption took place here was well over 50 years ago but it was still an odd feeling to be circumnavigating the crater of an active volcano.

Once within the crater we took an immediate right turn into Whaler’s Bay, a historical site where the remains of a whaling station and blubber oil production facility still exist.  Once on land the majority of us headed down the stone beach in order to climb to a scenic outlook for an interesting view of the vast Antarctic ocean channel. 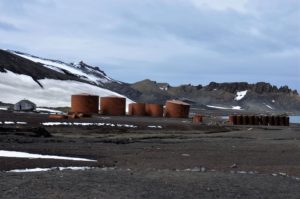 Following this breathtaking view we made our way back along the beach to explore the remains of the whaling station and airplane hangar.  It was interesting to learn that much of the structural damage to the buildings and whale oil storage tanks was cause by the last volcanic eruption which caused a massive flood from the melting glacier during the eruption. At the time of this last eruption the whaling industry had been shut down but the facility was being used as a research station and the inhabitants had to be quickly rescued by helicopter. 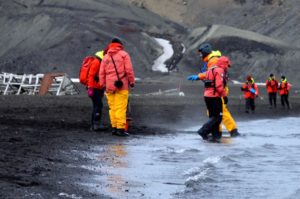 Steam emitting from the shore at Whalers Bay

As we waited on shore for a ride back to the ship on the Polarcirkel boats the confirmation of the active volcano was provided by witnessing steam rising from the beach and even feeling the significant warmth at the water’s edge. However, the temperature quickly dropped further to almost freezing if you were to walk only 10 feet off shore. 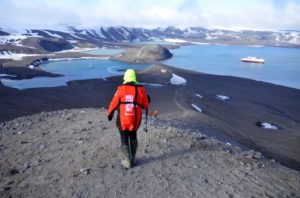 Hiking the crater at Telefon Bay

Once back on board, the Fram moved slowly across the 7 kilometre wide crater to Telefon Bay. This was our second landing for the day and an opportunity to hike entire perimeter of a smaller crater which provided for an impressive view of the inside of Deception Island from over 600 feet above sea level at the summit of the climb. 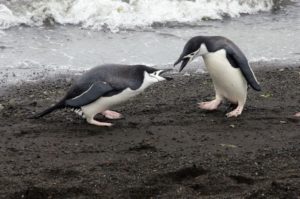 Following the hike a number of our group worked up the nerve to take a very brief swim in the Antarctic waters before returning to the ship. That evening over dinner we enjoyed sharing stories of our day and marvelled at the fact that half of our group of 16 had received certificates confirming they had swum in the Antarctic Ocean.