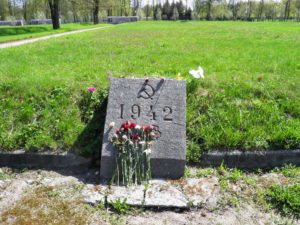 There is a place in St. Petersburg, Russia, where no tourist buses go these days.  Which is why we always go there.  It’s a broad stretch of land in a parklike setting on the northern sections of the city.  All you see when you first arrive is a flame of some sort near the entrance and then row after row of gently sloped earthen mounds, separated by a broad pathway. 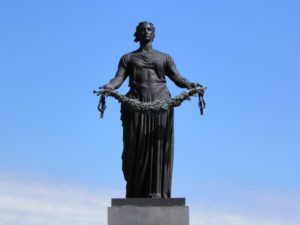 At the end of a pathway is a monument, which is the only thing that draws your eyes upward as you walk toward it.  The setting is peaceful, serene.

But that is only part of the story.

The setting happens to be one of the largest wartime cemeteries in the world, a place where some 500,000 Leningraders lie in eternal rest.  And the monument?  It is to Mother Russia, and she is holding a garland of oak-leaves in her outstretched hands, an ancient symbol of eternity.  On the low wall right behind Mother Russia is a poem which always moves me to read and translate.  It tells the remarkable story of Leningrad (now St. Petersburg) and the terrible price it paid during the Nazi invasion of World War II.  Putin himself has a brother who is buried there. 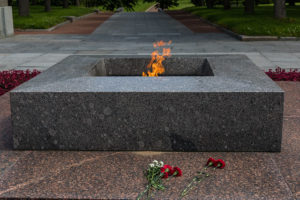 Every single TourMagination group we bring to this city stops by this cemetery.  People are always moved to be there.  It shatters stereotypes.  Last time we visited with a Russian who had come there with his young son from their home in Siberia.  He was moved that foreigners (like us) would care to come and to understand this chapter in Russia’s history.  “Why does the west always make us into enemies?” he asked.

That’s what we value about TourMagination.  It does more than simply check off the “top 5” sights (though you will see them in Russia, and they are all stunners).  But it gets you behind the scenes, on city buses and in cafes with Russians.  And it gets you to the Piskarevskoe Memorial Cemetery, with its burial mounds, moving monument and eternal flame.

This morning, I thought of all of this when I observed that today is the anniversary of the premiere of Shostakovich’s famed “Leningrad” symphony.   It was performed in August of 1942 even though the Nazis had surrounded the city, and famine raged all around.  Hundreds of thousands had died already, including many orchestra members.  Yet the music of this remarkable symphony came to life that day.  Hope was restored.  Beauty, and the resilience of the human spirit celebrated.

We’ll go by the hall where this piece was first performed on our upcoming 2020 Russia trip.  And we’ll tell the story. One of many you’ll hear on this remarkable trip.  It is a land overflowing with such stories.  And you’ll be right in the middle of it.