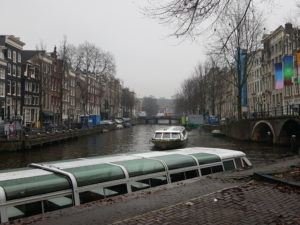 The “Christmas Markets on the Rhine” tour began on Saturday, December 2 in Amsterdam, the Netherlands  where we boarded the AmaSonata, a massive three level river vessel which will serve as our floating luxury hotel for the next week. Since our group arrived at different times many of us met for the first time during orientation in the spacious and comfortable lounge all decked out for the Christmas season. The opening day concluded with a delicious dinner where we also surprised one in our group, Vicky Dick, with a birthday celebration and the AmaWaterways staff were well prepared with a special cake and a sing-along which we all joined in on. Then it was time to catch up on the sleep many of us seemed deprived of following a long but uneventful overnight flight. 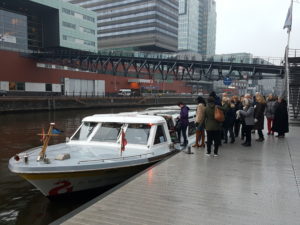 Setting out on a scenic canal cruise

Amsterdam, the Netherlands’ capital city, would be our focus for Sunday, beginning with a scenic cruise in a private boat skillfully maneuvered through the spider web of narrow canals that this unique city is so well known for. It was fascinating to view the new and historic architecture from a perfect vantage point traversing under low bridges and through narrow man-made channels, some of which had been constructed in the 17th century. Our guide intrigued us with stories and interesting facts about Amsterdam. 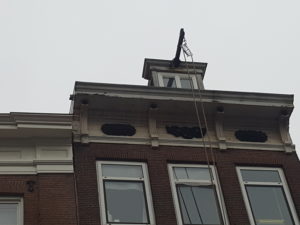 One of the many highlights were the unique architectural features that extended out from the top of almost every narrow residential building along the canals. Resembling an arm, this solid beam included a large hook serving as the anchor point to lift large objects from the ground to the large windows above since the inside stairs are narrow and no elevators exist. 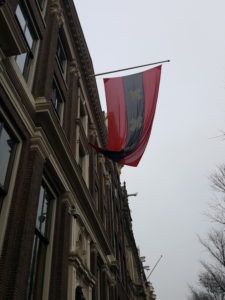 Another fact was about the commemorative flags evident throughout the city. These plain red flags with a black stripe in the middle and three large white “X” insignias served as a reminder of the thousands of lives lost to disaster in Amsterdam’s history. One “X” signified water, considering how the majority of the city suffered continuous floods before the expansive and world renowned flood defenses were constructed to hold back the tides and storms of the North Sea. The next signified fire, remembering the devastating fires that leveled most of the city before stone and masonry construction was introduced. And lastly the pollution that ravaged the population with disease before government officials outlawed the dumping of waste into the waterways. 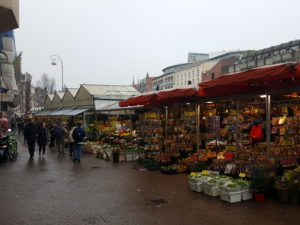 There was so much more to see and experience, that we realized Amsterdam is a place we must return to one day!

Following lunch on board the AmaSonata, we set sail down the Amsterdam-Rijnkanaal (Amsterdam-Rhine Canal), a major man-made shipping artery that includes a series of locks to provide a water connection to the Rhine River and the many historical communities which we will visit, especially the beautiful Christmas Markets in the coming days.