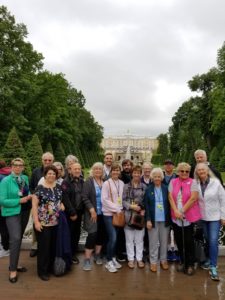 Truth is that I’ve been somewhat under the weather the past few days. It started on the Moscow subway, and though it hasn’t stopped me from being a co-leader in the group (thanks to Mary especially as co-leader!). But it has put me behind in the blogs.

We’ve ended our collective time in Russia with a final meal in St. Petersburg on the Moika Canal in the Yat’ Restaurant. Some departed early for two different theatres. The rest of us wandered onto the great Palace Square after our meal, ringed by the Winter Palace and the General Staff Headquarters, with the Admiralty Spire, St. Isaac’s Cathedral, and the Neva River in the distance. I asked Hans, walking beside me: “Is there a more beautiful square in the world?” Hard to think there would be, though I suppose that some might well come to mind.

It is now past 10 p.m. and clear as daylight still in the White Nights of this city. I’ll close off here as we head for the airport in just about 4 hours. But I will pick up this blog on my return to fill in some of the missing pieces, even if only in retrospect.

In the meantime, good night faithful readers, from Russia, the most extraordinary part of the world, even as it is one that is so often and too easily maligned. Come see for yourself why its splendours outweigh even your greatest misgivings.