Today was spent in the area of the Emmental, which contains a great deal of Amish history.

Although we could not enter it, we saw Thun castle, where Anabaptists were imprisoned at the top. 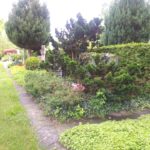 In Steffisburg, we visited a cemetery which contains a quantity of names from Amish and Swiss Mennonite heritage. A number of people in our group had a good time looking through the gravestones for names from their heritage.

We also saw the Steffisburg church, notable for the large old plaque bearing the names of those who had contributed financially to its upkeep, including various Yoders. Brad Yoder, when asked how he’d enjoyed this visit, was heard to say, “I am happy. I’m home.”

At Trachselwald castle we were able to climb the tower where many Anabaptists were imprisoned, including Hans Haslibacher.

Our lunch stop today was special as we went to a Käserei (cheese factory). I took the opportunity to order a dish featuring a quantity of cheese and it was, as expected, delicious. 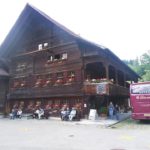 Our second cemetery visit of the day was in Langnau, which was again of interest to those who had ancestry from this region. The Langnau church, which we also saw, is notable for being the longest-running Anabaptist congregation. It was formed in 1530 and has been continuously meeting ever since!

Our final visit in the Emmental was to a local cultural museum in Langnau to gain a better understanding` of the cultural context the Anabaptists were living in. The museum was located in a traditional Swiss building dating back 500 years and was filled with artifacts relating to local historical culture, with everything from cheesemaking and pottery to children’s toys. A fascinating visit. Multiple people I talked to said that they loved seeing things they recognized from their own traditions–such as the decorative pottery or the heart-shaped waffle iron.