For many in the group this was the highlight of the trip, at least in advance.  For so many had heard of the Hermitage.  This art gallery, one of the largest in the world, is housed in the former Winter Palace of the Romanov Dynasty.  Is there a more stunning Imperial setting anywhere? 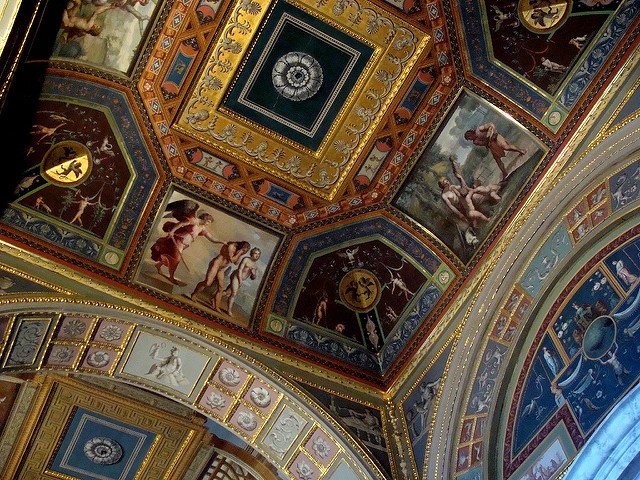 We spent the morning at the Hermitage, and our time can be split into two parts:  first, we saw the principle State Rooms of the Winter Palace, from the Throne Room to the Hall of 1812 to the great ball room and on and on.  Though this time of year can be chilly, the difference in crowd size more than made up for it.  We had room to wander, and often we were in the principal rooms without any one else there.

Then came the art?  Highlights?  There are simply too many to mention: the two Madonnas by Da Vinci stand out as do the paintings by Rembrandt, especially “The Return of the Prodigal Son” and “The Sacrifice of Isaac”.  Then the works by Michaelangelo, Raphael, and one could go on, or the treasures of ancient Greece and Egypt and I’ll stop here.  It was literally one awe-inspiring site after another.

We had lunch where I’ve eaten with many fine groups before:  in the cafes at the bottom of the Hermitage building itself.  In the afternoon some returned to our hotel for some Rest and Relaxation; others went to the works of the French Impressionists (now housed in a separate building), one returned to the main collections of the Winter Palace, and the rest wandered into the heart of this great Russian and Imperial city, with rivers and waterways everywhere.

By evening we gathered again for our meal at our hotel.  It’s been a terrific day, with more to come.  Tomorrow will be our last fully organized day before a free day on Thursday.  Not long ago this trip was all about beginnings, whereas now it is the ending the begins to take shape before us.