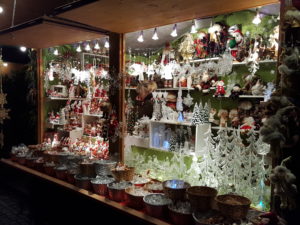 The AmaSonata (our luxurious river boat) cruised most of the night and into the morning which offered a relaxing start to the day. By noon we docked in Mannheim which would serve as our outpost. It was interesting to learn that this port city was renown for two very significant inventions that have changed our lives to this day. In 1817 Karl Drais created the first bicycle, and in 1885 a Karl Benz (what would eventually become Mercedes Benz) built the first production motorcar.

Unfortunately our schedules did not allow for more time in Mannheim to explore these and other cool features as the busses set out directly after lunch to the towns of Speyer and Heidelberg to experience some rich history and more unique Christmas Markets.

Heidelberg is well known as the home of the oldest universities in Germany which was founded in 1386. This tour also featured the Renaissance-style castle which is only partially rebuilt since its destruction in the 17th and 18th centuries. 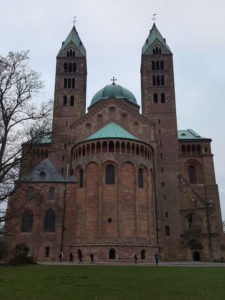 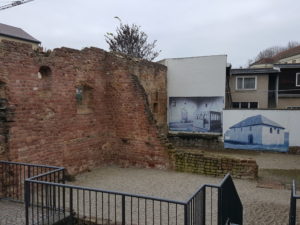 The other tour took a number of us to Speyer, one of the oldest remaining communities in Germany. In 1024 Konrad II from the Speyer District was elected King of Germany which launched this community into history. One outcome of his reign was the construction of the mighty Speyer Cathedral, the largest Romanesque church in existence today.

Speyer is also known as the first community of Jews to enter Germany when Bishop Rudiger Huzmann invited Jews to settle not far from the Abbey and Cathedral. The remains of the Speyer Synagogue are on display along with the Mikveh (ritual bathing pool) which is almost unchanged since its recorded use as far back as 1126 and continues to be naturally fed by an underground spring.

Before heading back we enjoyed an hour of shopping through the local Christmas Market and like most we have visited to this point it was difficult to not find at least one item that would make the trip back to North America. 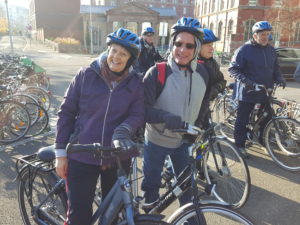 Karen and Larry Loganbill enjoying a cycling tour in Strasbourg 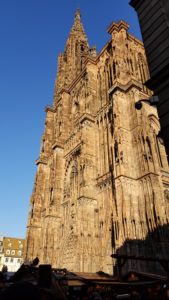 On Thursday morning we woke up in Strasbourg and everyone ventured off early for a variety of tours through the old and new parts of the city. The cycling tour option proved attractive to a large group and the weather cooperated with mild temperatures and bright sunshine to quickly melt the slippery overnight frost. The rest ventured out on walking tours but we learned afterward that we had all managed to see similar key sites throughout the city.

Strasbourg, despite the violent times in history, has served as a bridge between France and Germany for centuries. A valuable example is the University of Strasbourg where Catholic and Protestants cultures have co-existed over this same period. Another important site we visited was the Cathedral Notre Dame de Strasbourg which has been most famous for its astronomic clock impressively preserved in this place of worship. 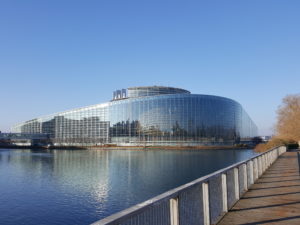 Another interesting stop along our tours was the expansive and unique architecture of the European Parliament Building. Nearby was the European Court of Human Rights facility where tent cities are known to form nearby until individuals and groups are provided a hearing. 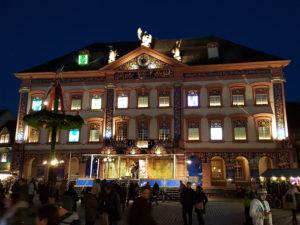 In the late afternoon three large buses departed for a 45 minute ride to the quaint German village of Gengenbach located on the edge of the Black Forest. We arrived in time for a brief tour down the narrow cobblestone streets and an hour or so to visit the local shops and Christmas Market kiosks before the unveiling of the next window in the World’s Largest Advent Calendar House. Every evening a new window reveals a well-known artist’s work to a large crowd of local residents and tourists under a backdrop of very colourful Christmas Market shops.

On our return to the ship our buses were delayed by almost an hour due to a road blockade to enable four trucks to maneuver their oversized loads over the same bridge we had to cross in order to reach our boat. Each truck was actually carrying a massive 36 meter (116 foot) long wind turbine blade destined for somewhere in Germany. We eventually arrived back for another delightful dinner before calling it a night.