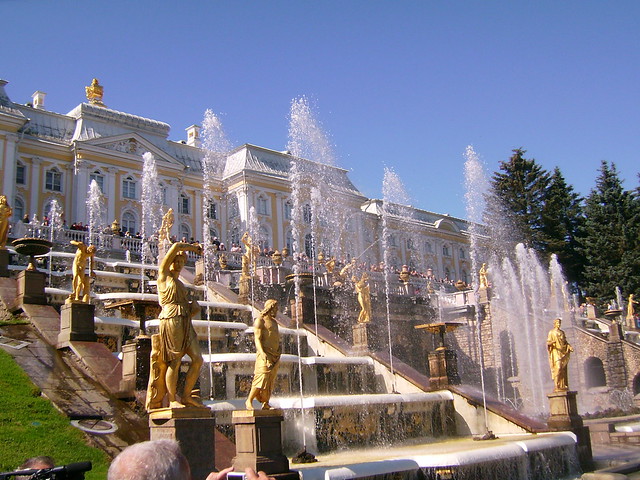 On our last full day of planned activity our TourMagination tour went to Peterhof in the early morning.  This is justly claimed as one of the great Summer Palaces of Europe.  Beautifully situated on a cliffbank overlooking the Gulf of Finland, and with scores of fountains cascading before us, we strolled the lower park, stopped at Peter the Great’s actual Summer Palace, and toured the Grand Palace itself.   It is a marvel, and all the more  so as it was utterly destroyed by the Nazis during World War Two.

We then took the hydrofoil back into the Imperial city and set off for our afternoon excursion.

Some tours keep you cut off from the “locals” but not this one, as when our bus stopped en route to the Piskarevskoe Cemetery.  We wanted lunch, and so stopped and add at the Teremok Restaurant in the north end of the city.  It was yet another great experience of being side-by-side with everyday Russians.  Old stereotypes erode as we ate our Borscht soup and ate our wraps.

Then to the Piskarevskoe Cemetery, which I was told no foreign tourist groups every visit (except for TourMagination that is).  We know so little about the terrible price that the Soviet Union paid in World War Two when it faced (alone) the largest military invasion in the history of the world.  The 900 day seige of Leningrad (St. Petersburg) was the longest and deadliest such siege in world history and resulted in 1.5 million deaths or so, largely of starvation.  That in a single city.

Why go to such a site on a tourist trip?  It is because TourMagination is about so much more than “Top 5” TripAdvisor sites.  It is about the big picture, which often takes up beyond the glitter.  That is how it was with this trip.   I will not describe the Cemetery itself except to say that I always find time there to be profoundly moving.  And was it worth it?   The amazing Pearl captured it for all of us when she commented, getting on the bus after:  “It is good that you brought us here”.