Today we travelled to our last country of the tour, Austria! But our route happened to take us through the tiny country of Liechtenstein for a brief while, so we can say we’ve actually been in 6 countries in the last two weeks. 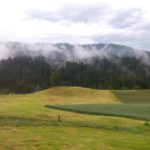 View from the Bus

Much of our day was taken up in driving, but we found ways to entertain ourselves. Some people shared on the bus mic about topics of interest to them, John told us about the Hutterite history in Austria, sometimes we engaged in conversation amongst ourselves, and some took advantage of the time to nap.

When we reached Innsbruck, our destination in Austria, the rain which had been following us for the last leg of the drive disappeared. So we were able to visit Hutter Park in the sunshine. At this park, there is a memorial placed to remember the Anabaptists who were persecuted in this area. The memorial phrases it well: “This park is a place where we can reflect on how we treat dissenters. It stands for religious diversity in urban areas.”

After dinner, many in our group attended a Tyrolean folk show. This is a family-run show demonstrating the music and dance traditions from the Tyrol region. It was much enjoyed by us all, I think! In the van on the way back to the hotel, we were all excitedly talking over our favorite parts. I was particularly captivated by the dancing as I have some interest in traditional dance. All the stomping looked like fun!

I’m afraid I only have a few pictures to share today, as the folk show did not allow photos.