Today’s Sunday, which I noticed right away because the bells from the nearby Worms Cathedral woke me up early! Historic cathedrals may be magnificent to visit but I think I’m glad I don’t live near one. 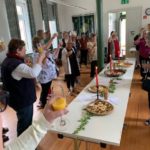 John Sharp managed to arrange things so that we could visit a local Mennonite Church service this morning. We worshipped with the Bammental congregation, and they were so gracious in their welcome, and in engaging in on-the-fly translation so that we could all understand the German service. The theme of the service was the importance of forgiveness within a community, a message worth listening to. After the service, we joined them in a celebration in honour of their congregation’s 30th anniversary. They told us that far from being an imposition, our presence was a miracle–because it meant there were enough people for a good celebration despite much of the congregation being away at this time.

Then we visited the Steinsfurt cellar, another Mennonite worship place but this one dating back to the 1600s. This is a secret location where Mennonites worshipped when their gathering for worship was not permitted. It’s amazing the dedication the early Mennonites had to gather for worship despite the threats to them. 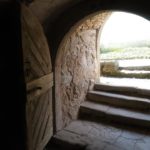 Nearby the cellar is a small Frederick the Great museum which we decided we might as well visit while in the area. The curator did not speak English but Tina Siemens was able to translate for us as he told us about Frederick’s history.

At the Steinsberg tower, we were in an area where Mennonites had been invited by a person of power who was willing to accept them. The tower is all that’s left of what used to be a castle, but from the top of the tower there’s an incredible view of the surrounding countryside where you can see villages where Mennonites lived. 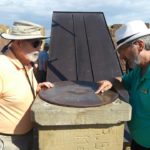 There were fewer stairs in the Steinsberg tower than to the top of the Cologne Cathedral tower (only 136 today if I’m remembering my count correctly) but the steps were very shallow so it took some attention. The views from the top of the tower were spectacular, but even those in the group who decided not to climb the stairs got an excellent view just from the high ground the tower stands on.

Then we added a brief stop at Buchenauerhof, where Mennonites used to live and worship. It is now a space used by a German missionary society, and one of the staff was kind enough to show us around.

Over dinner tonight, we celebrated three milestones amongst our group–two wedding anniversaries and a birthday. I’ll leave you to guess who!