Home Tour Journals The Magic of a Spontaneous Visit in Alwinz, Romania

The Magic of a Spontaneous Visit in Alwinz, Romania

The Magic of a Spontaneous Visit in Alwinz, Romania 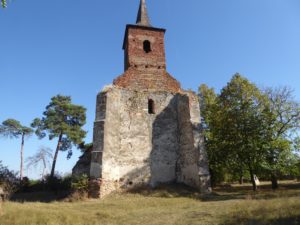 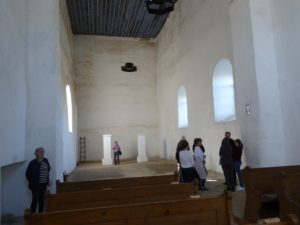 Inside the Reformed church

Walking through an “Empty Church” leads to reciprocal gifts and unique experiences.

There is no remnant of the Hutterite colony in Alwinz remaining as the site was very flood-prone and totally abandoned by the mid-1800s. There is what appeared to be an abandoned Reformed church next to the site and only a short walk from the castle ruins. Some expressed an interest in seeing where the colony had been so we walked to the site. The church ruins were fenced in with a paddle lock on the front gate. As we walked around the church I noticed that there were brand new downspouts on the building and new windows had been recently installed. Cris, our guide, said he would try to find the person with the key. A short time later a woman arrived to let us into the church. The church had been taken over by the Communists and used as a hay barn and sheep shed. Returned to the Reformed Church after the overthrow of the Communist government, the church supports a small congregation that meets once a month and are pastored by an individual who serves a half dozen of these small congregations in the area. The church is nearly empty except for a few benches and pulpit. The church guide told us that the church has no electricity or heat. As it costs too much to pay for the power poles and electrical line from the nearest source, they are raising money for solar panels so they can have light inside the church. Someone was inspired to sing a couple of hymns and the sound of our tiny choir reverberated through the empty church. As we left, people opened their billfolds and began dropping donations into the basket near the door.

Spontaneous events can often outshine planned events if allowed to develop. This flexibility is a hallmark of TourMagination tours. This was true of our visit to the Reformed Church in Alwinz.
Our morning began with a short walk to the oldest synagogue in Romania. Our next stop was the Romanian Orthodox Cathedral of Reunification, a beautiful building constructed after Transylvania was returned to Romania after WWI. We were joined by Dr. Gudor Botond, the pastor of the Reformed Church in Alwinz we had visited the day before. He had heard of our visit and contacted either Eduard or Cris to express his desire to meet us. When he heard that we would not be able to visit the Batthyaneum which contains numerous Hutterite codices because the library is closed for a complete inventory of its holdings, he asked if we had tried the Archdiocese Archives located a couple hundred feet from where we were. 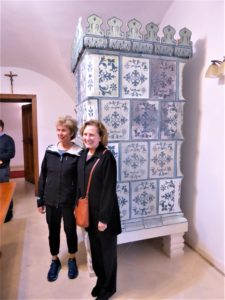 He contacted the Archivist and within 15 minutes we were in the archives being show documents relative to the Hutterites. One was signed by George Rakoczi I, Prince of Transylvania, in 1631 which listed all the privileges granted the Hutterites by Prince Gabriel Bethlen in 1622 and confirmed by the new Prince. After viewing a number of documents, the Archivist asked if we would like to see a Hutterite stove. He then led us to another part of the building where we saw a large porcelain stove. He said that the stove is one of the most complete versions of the Hutterite stove and was, therefore, very valuable. Pottery was one of the major sources of income for most Hutterite colonies at the time. We then visited what is now the 13th century Catholic Cathedral next door. It was a Reformed cathedral at one point when the Hungarian rulers of Transylvania were Protestant. The church contains the crypts of several early rulers of Transylvania.

These unplanned visits to the Reformed Church and the Archdiocese Archives were some of the most special experiences for travellers on the first Romania Hutterite & Culture Tour in October 2019. The next Romania and Hutterite Culture Tour takes place June 5-16, 2021 with tour leader Rod Hofer.