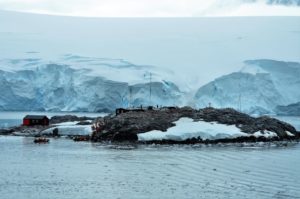 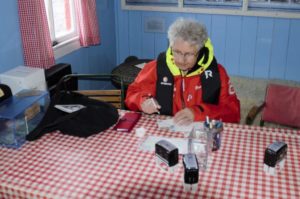 Sending off postcards from Port Lockroy

The Fram travelled further south throughout the night and we woke to an announcement that we had arrived at the small island where Port Lockroy is located. One of the four young women that operate this historic location came on board to offer us a presentation on the history of this site, what she and her colleagues keep busy with on a daily basis, and what we would experience once we set foot on the island. One of the key responsibilities for these women at Port Lockroy is to maintain the museum and gift shop during the four months they reside there. We learned that over 300 applications come in annually for these four positions and successful candidates go through a rigorous evaluation process. It was also fascinating to learn that Port Lockroy receives over 15,000 guests annually via expedition ships and private sailing crafts that make their way through the South Shetland Islands. 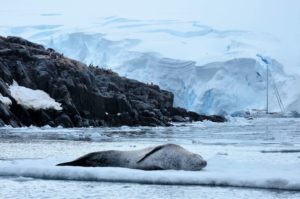 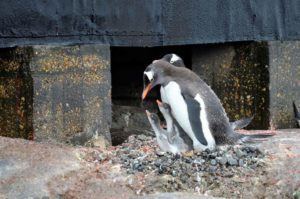 Following the small walk of the island, a tour of the museum, and some shopping in the gift shop, we returned to the ship in order to make room for others as there was a limit of around 30 people at one time on the small island. On the shuttle back the Polarcirkel boat driver took us past two flat ice floes where a crabeater seal and a leopard seal were sleeping. These animals were difficult to capture with a camera but the sound of multiple clicking of camera shutters echoed in the quite air.

The most picturesque part of the Antarctica expedition was about to take place as we now made our way through the Lemaire Channel. The captain skillfully zig-zagged around enormous icebergs as we slowly sailed through the pass. The gigantic shear cliffs on each side felt like they were closing in on our ship and at one point the channel narrowed to only 300 feet between the sharp rocks on each side. 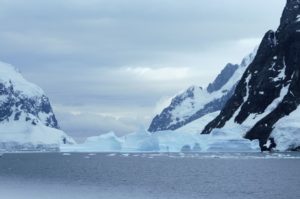 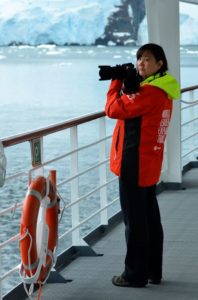 At the south end of the Lemaire Channel the Fram took a left into a bay where we would head out for a 30 minute Polarcirkel boat ride where we located seals and whales amongst very close exposures to the many amazing iceberg sculptures.

Our last stop was off shore from Petermann Island where Ella and Dorothy would enjoy an overnight campout with about 20 others from the boat. Based on the wintry conditions, they were thankful the Hurtigruten provided very high quality camping gear.