Today was a rather conventional day in Moscow, but that only tells half the story.

The conventional part was the first half of the day when we went to the Moscow Kremlin and toured the Armoury along with the great Cathedral of the Assumption.  We’ve had a wonderful guide this tour and she has even made the 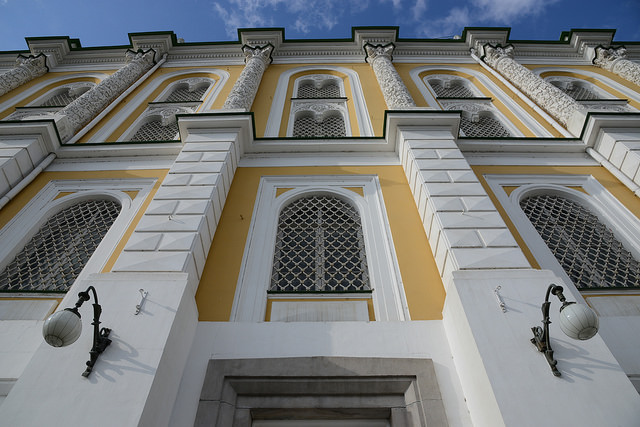 The Armoury building in the Kremlin in Moscow, Russia. Photo: Jorge Lascar.

ome alive, with its carriages and icons and priestly robes and coronation thrones and so on.  As for the Cathedral of the Assumption, well, if you’re not familiar with it just “Google” it and see the splendour of its interior.

That part of the day was conventional in the best sense; the sense in which all tours to Russia will want to come to Moscow, and then the Kremlin, and then the sights that we saw.  It was enthusiastically received by our group.

But that’s only half the story.

In the second half we broke all convention in that we found ourselves with the sort of schedule that few other tours will ever get to.  For starters, we had lunch with the good people of Moscow, and well away from the tourist hotels, when we went to “Stolovaya 57” in the State Department Store  (“GUM”) across from Red Square.  It was a chance for Soviet/Russian food and easy conversation, and reflection on the morning.

It was also unconventional because we spent the afternoon and evening with Alex Reinhart, a former student of mine who fell in love with Russian history and culture while at Wilfrid Laurier University, who travelled with me and 14 other students to Russia about 7 years ago. He subsequently returned to Moscow and now lives here “for now”.  He teaches English to Russians. Alex agreed to accompany us for the afternoon and the evening.  He was delightful and the group clearly enjoyed his perspectives.  They could not help but be struck by his love of Russia, and Moscow especially.

That’s a TourMagination tour; it’s the time when you get a “value added” that has nothing to do with the substantial “tourist sites”, however wonderful they may be.

We ended our day with a fine evening meal at an Armenian restaurant, and then more easy conversation in this lovely hotel lobby before I walked Alex back to the “Arbatskaya” Metro Station.

So it was partly a conventional day in Moscow, and partly unconventional, and that’s great and good on both accounts.

But tomorrow is another day, our last full one in Moscow.  Who can believe it?

Oh, and two of our group went to the world-renowned Bolshoi Theatre this evening.  They just got back with their own great stories to tell.