The fact that we lost a night seems to be creating confusion. A few times today people asked “What day is it?” or “Is it really Friday?”

We stopped by the Simon the Tanner’s house and looked out over the port from which Jonah attempted to flee God’s calling.  We noted the difference in response to God: Peter was willing to risk a lot in response to how God spoke to him about the Gentiles, Jonah was willing to throw in the towel in his rejection of God spoke to him about the Gentiles. 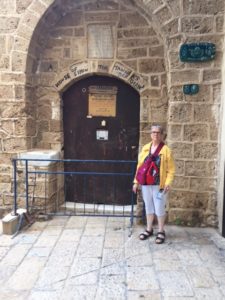 An hour later we were at the breathtaking Caesarea Maritima – an expansive beach-side city, built by Herod the Great, obviously with no expense spared.

We contemplated Paul’s time here, his faithfulness to his call – to proclaim the gospel and the fact that this was where he last set his feet on the soil of Israel. 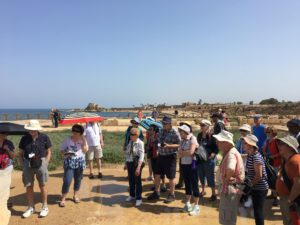 Our group with just a small part of the Caesarea city behind us…we are looking at the stone that lists Pontius Pilate as the governor of Judea…yeah, we’ve all heard of that guy.

The Roman aqueduct that brought water from the city all the way from the foothills of Carmel. 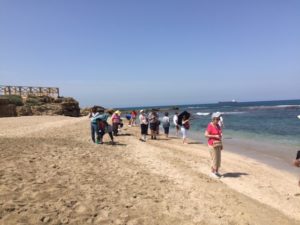 The Mediterranean water felt sooo good and right in the remains of Herod’s water palace.

We were at Mt. Carmel before lunch – we took the mandatory group picture below the massive monument of Elijah, which is just outside of a Carmelite convent. We read just about all the things that happened at and around Carmel (a lot more than Elijah). We took in the amazing view of the Jezreel Valley – a valley of battles in the past and likely yet in the future. 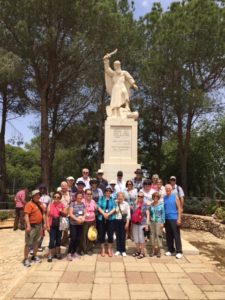 Here were are, right where Elijah did his big thing.

Acco was another wow – how do you build a really impressive crusader city, get it captured, let it get completely covered with dirt, build another city on top of it (including a prison) and then discover the ancient city below when the prisoners are trying to dig out a tunnel!  That’s Acco for you! 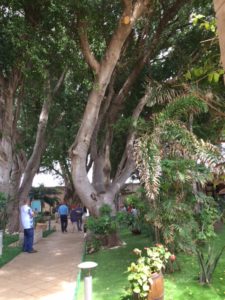 Sycamore tree in the entrance garden at Acco– hmm, now I can see how the short Zacchaeus managed to climb a tree! 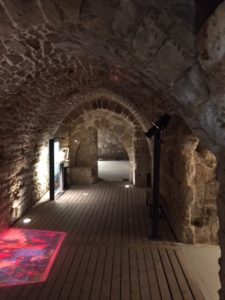 One of the smaller Acco passageways.

A quick drive-past the Baha’i gardens in Haifa and before you know it we were in Galilee and at Nof Ginosar – our home for 4 nights – the grounds are amazing, the fresh “welcome” dates were unbelievable, and I think we will try to count the number of options at the dinner buffet tomorrow. 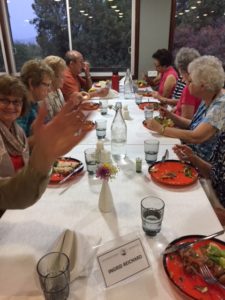 Tomorrow is all about Jesus – around the Sea of Galilee.