Today was classic TourMagination. To accommodate our travellers’ interest, we changed our route between Prague and Krakow. To make plans, I had phone conversations with John Ruth, Leonard Gross, and Gary Waltner. Armed with their help and Internet information, we made our first stop in Brno, an administrative center of Moravia, where 4 Anabaptists were executed in 1528 and 1535. We were eager to see the exhibit of Hutterite documents and Habaner pottery, for which they were famous that was posted on the museum’s website. We were disappointed to learn that the exhibit had been moved elsewhere.

Instead, we went to the old city hall where the death sentence was announced, ad-libbing our own announcement. We walked to the market square for our homemade ritual to honour the martyrs. We stood in a circle beyond the market stands and named the martyrs: Thomas Waldhauser, Balthasar, Johannes Zeising, burned at the stake on April 10, 1528; and Wilhelm Griesbacher executed in 1535. Gareth Brandt and Garry Bueckert read portions of Hebrews 11 and the group responded with “God be Praised” or “May God be merciful” depending on the tone of the verses. We followed by singing “Faith of our Martyrs.” We lived the moment as much as we could imagine it. 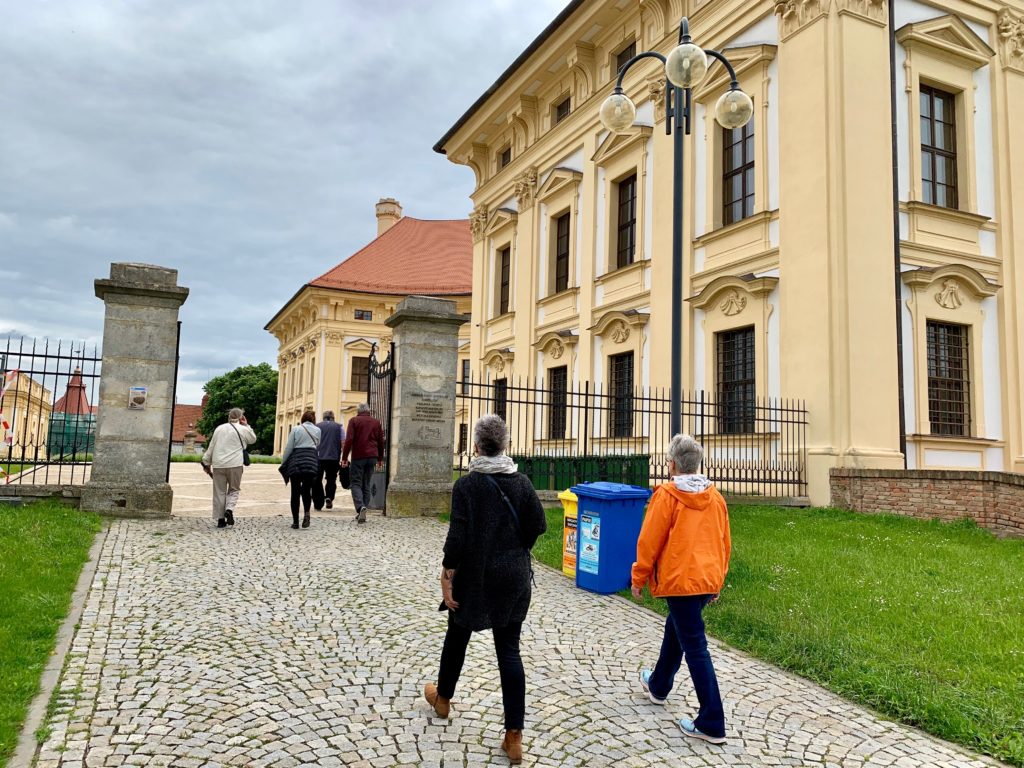 Then it was off to Austerlitz, now Slavkov u Brno, the center of the nonresistant Hutterite group. On the bus, Gareth Brandt and I spoke of Hutterite history and life.  in 1528, 200 Anabaptists/Hutterites left the large city of Nikolsburg and prepared to walk to Austerlitz. Before leaving they sold as much of their possessions as possible. When they gathered outside the city to begin their journey, the 200 laid their proceeds on a blanket.  In this way, what began as a means of survival, became practice, fortified by Acts 2 where the apostles “shared everything in common.”

Why leave? The minority of 200, abandoned the larger group of Nikolsburg Anabaptists after a 1527 debate that ended with the majority voting in favor of paying war taxes and using the sword in self-defense. As the pacifist pilgrims walked 60-some miles to Austerlitz, they must have wondered how their Nikolsburg community could give up the practice and theology of nonviolence, present at the birth of Anabaptism in Zurich and confirmed by the February 1527 Schleitheim Brotherly agreement.

The 200 were welcomed by the ruling family of Austerlitz, Peter, Johann, Ulrich and Wensel von Kaunitz. They were settled with the support of the lords of Austerlitz and when the news of their tolerance spread, other Anabaptists from many places came to this Moravian “promised land” making this the most important center of Anabaptism–until forced to leave by imperial mandate in 1622.

With this story in mind, we walked the grounds of the Kaunitz palace overlooking the city. We imagined the settlers working at the palace and in the surrounding countryside. We were grateful for their commitment to the way of Christlike love, even for enemies. 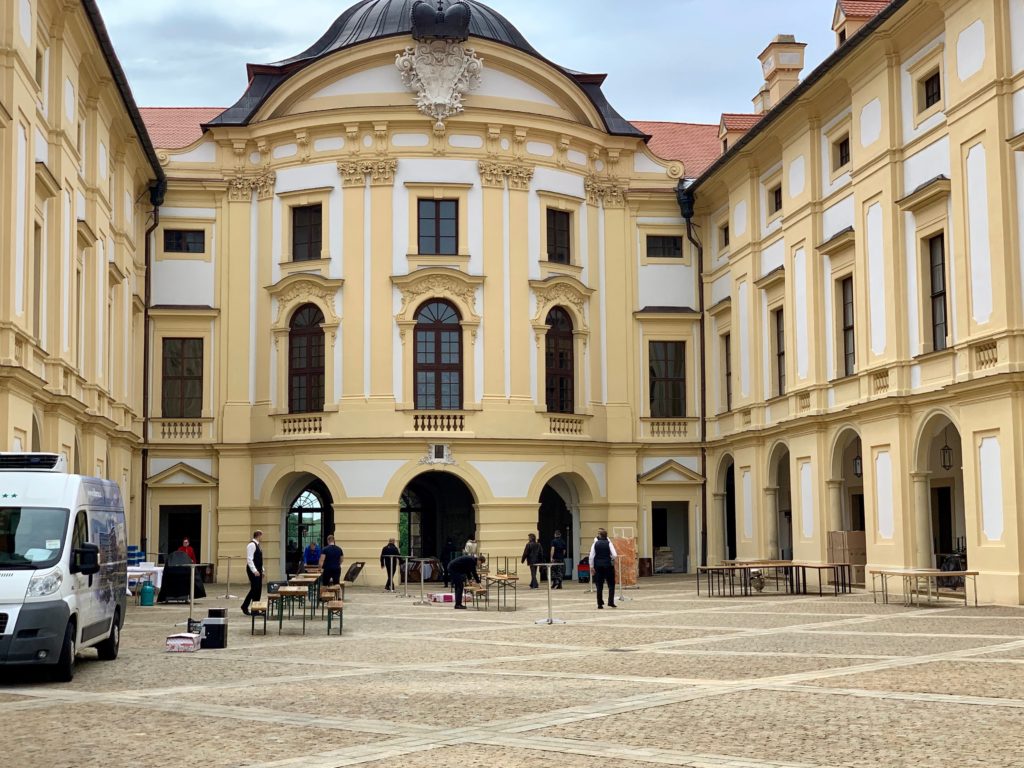 By the time we reached Austerlitz, our TMers had heard a lot, eliminating the need to tell the story on location. As we boarded the bus an hour later, our local guide Kasia was grinning from ear to ear with a brick in her hands. She had asked for the brick from the palace to add to her collection at home. If Kasia is happy, we are happy.  We had a long ride, a late dinner, and comfortable beds ahead of us.

You can travel with John Sharp on the next Poland & Prague Tour in 2022. Or travel with Gareth Brandt to The Netherlands, Northern Germany and Poland on the Epic European Anabaptist Heritage Tour: Low Countries June 14-21, 2021