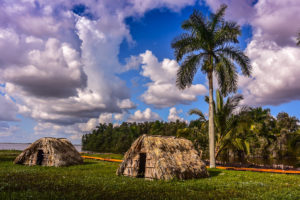 Today, the group had perfect weather to travel by boat to a Taíno Indian Village. They learned about the traditional lifestyle of the Taíno people, who were once Cuba’s principal inhabitants. Later, they went to the Bay of Pigs museum to learn about the historical US invasion that took place in 1961. Travellers were very interested in what they learned at the museum.

“We had another excellent day. The interaction with the Brethren in Christ (BIC) church leaders was almost electric,” says tour leader Jack Suderman. It just happened that the BIC leaders were having a planning meeting with about 20 pastors and leaders at the BIC Training Centre. The pastors came to greet the tour group and take part in a conversation. “Our group asked wonderful, penetrating questions, and the conversation was VERY good. Folks are really inspired,” says Jack.

Tour members organized a de-brief session for 90 minutes today after supper to talk about how or if they could support some of the BIC projects in Cuba.  They plan to continue the discussion while relaxing in Varadero.