One final landing and then sailing home – January 11 to 13

One final landing and then sailing home – January 11 to 13

The campers packed up early and arrived Thursday morning for breakfast and we learned it had been a peaceful night despite the constant chatter of the penguins. Apparently a leopard seal had parked itself on shore and so the campers had to find a new departure location which proved challenging.

Brown skua fought off by penguins 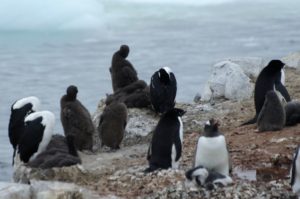 Adélie and gentoo Penguins and blue-eyed shags together

Our last landing was on Petermann Island where we came across a mixed colony of gentoo and Adélie penguins along with a number of blue-eyed shags (relative of the cormorant) and a few brown skuas looking for opportunities for a snack. As a number of us awaited our ride back to the ship two massive icebergs just off shore all of a sudden rumbled and broke apart but it happened so fast no one could get their camera out in time to capture this unique event.

Following lunch the captain came on the loudspeaker to inform us that we were now going to sail a bit further south to within about 60 miles (100 kilometres) of the Antarctic Circle and then head north up the west coast of the South Shetland Islands. He also informed us that the ride back, which would take more than 48 hours, would be a bit rough as a low pressure system had formed above the Drake Passage but the conditions would be quite normal for this body of water.

Many of us installed our motion sickness patches to help manage the motion of the boat but come morning we would know better what the next two days have in store for us as we cross the Drake. 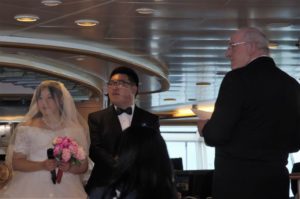 In the afternoon everyone on board was invited to the Panorama Lounge on the top deck to witness a wedding of a Chinese couple. The captain officiated as his official position also qualified him to legally take on this role. The couple looked very happy and we learned that they had invited a number of people on the ship to act as official witnesses as they had joined this expedition on their own.

That evening we celebrated Shirley Dick’s birthday and the serving staff presented a cake and enthusiastically sang their rendition of a birthday song which was really fun. Unfortunately the rough ride caused a few of our group to miss dinner as they needed to lay low in their cabins until they could find their sea legs. 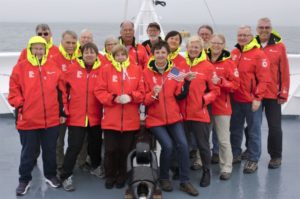 TourMagination group shot on board

The seas had become slightly rougher overnight and at breakfast on Friday the captain announced that the conditions were measured at a Beaufort 7 (on a scale of 1 – 10). Most of the group had developed their “sea legs” and were faring reasonably well but it seemed like we were all experiencing the drowsiness that comes from the constant slow rocking of the ship. It was especially difficult to remain fully awake during the many interesting lectures that were presented by the knowledgeable crew. We had already been sailing for over 36 hours and we had just passed the half way point to Ushuaia where for most the tour ends.

It was late morning on Saturday when the word started spreading throughout the ship that land was spotted in the distance off the bow. This was an early sighting of Cape Horn which surely was much less dramatic than when the sailors in the 18th and 19th centuries crossed the Drake Passage following many more days at sea than we experienced. As we did come within 3 nautical miles of Cape Horn (with special permission from the lighthouse keeper) it was an impressive sight and many on board ventured out to the front deck despite the strong cold wind and swaying of the ship in waves up to 20 feet in height. 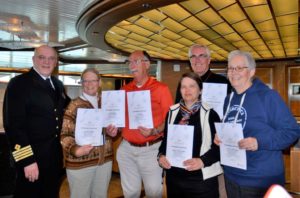 Tonight we celebrated Dave Frey’s birthday at dinner and the serving staff came through again with a song and a cake with a large sparkler drawing attention from the entire dining room.

After dinner we enjoyed one last story from Dave Fletcher, a man who has over 45 years of experience working and living in the Antarctic. His captivating stories were one of the top highlights from this trip.

Before we turned out the lights for our last night on board the Fram, we packed our bags and delivered them to a central location so that the ship’s crew could get them to the airport early Sunday morning in time for our charter flight back to Buenos Aires.

A trip none of us will ever forget and one that cannot easily be captured in photos and/or stories. The only way to truly appreciate the beauty and uniqueness of Antarctica is to experience it yourself!