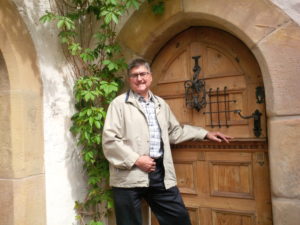 Wilmer at Wartburg Castle, where Luther translated the New Testament into the common language of the Germans 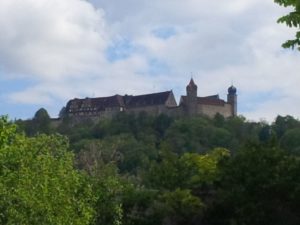 Coburg Castle, where Luther stayed during the Diet of Augsburg

On Monday after a driving tour of the Nazi sites of Nuremberg, we traveled to Bamberg. We enjoyed visiting the Romanesque Cathedral, dating to 11th century. The Monastery Church was closed for renovations; however, we enjoyed walking over the many bridges and tasting the local foods and drink. After leaving Nuremburg, we stopped to allow group members to take photos of the Coburg Castle. Martin Luther took refuge here for 6 months in 1530, during the Diet of Augsburg. He was not permitted to travel on to Augsburg. He could only communicate by letter.

Our tour of the Wartburg Castle was extremely interesting. There were thousands of tourists. We were pleased we were scheduled early. The castle was refurbished for this 500th anniversary of the Reformation. While here Luther translated the New Testament from Latin to the everyday language of the Germans (Saxon German), which became the spoken language of the German nation. We visited the room where Luther worked for 11 weeks to complete the work.

Nancy Kelly in reflection said, “What are we consumed by today that will have lasting impact?” Luther’s passion for translating the New Testament into the language of the people helped to break open the Reformation.

Our drive from Eisenach to Wittenberg was beautiful. We saw huge prosperous fields in former East Germany. The fields of canola were a radiant yellow. We are told they use the seeds to produce cooking oil but also petroleum products. 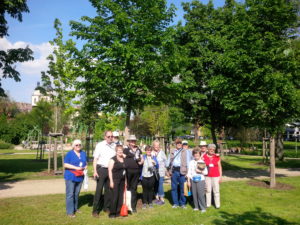 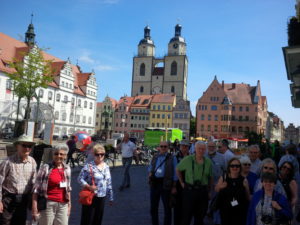 Wittenberg town square, with the famous Castle Church in the background

When we arrive in Wittenberg there were already 30 coaches ahead of us. The castle church towers, as well as the town church towers, were shinning a welcome in the sun. The 500th anniversary of the Reformation is clearly an event of global importance. Pilgrims from around the world were here today. It is here where Luther tacked the 95 thesis on the Castle Church door. We were pleased that we had beautiful weather to enjoy and explore the house where Luther’s family lived. Katherine Luther also operated the boarding-house and their farm, as well as a brewery. Her business skills and leadership allowed Martin Luther to teach, write and provide leadership in the church and Reformation. Many of us enjoyed participation in the 3 pm English worship service in the Town Church Sacristy.

Our last stop today was visiting the Luther Park. We took a photo of the group in front of the linden tree planted by the Waterloo Lutheran Seminary. This tree looked very healthy.

Now off to Leipzig and its famous St. Thomas Church.