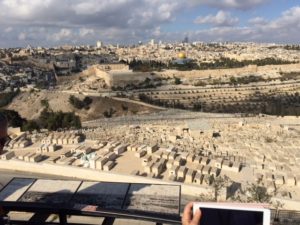 A view of Jerusalem from the Mount of Olives 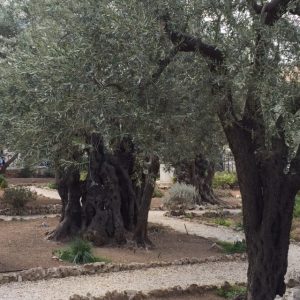 Ancient olive trees in the Garden of Gethsemane

On Thursday, we began the day with an overview of the city on the Mount of Olives at the Seven Arches Hotel. A lookout provided a panoramic view of the old city from the east side of the Kidron Valley. From there, we went down the hill to the Garden of Gethsemane. We had the good fortune of a reserved space in part of the garden for a quiet time of scripture reading, singing, prayer and sharing. We also visited the Church of All Nations, also known as the Basilica of the Agony, which stands right next to the garden.

From there, we visited the Pool of Siloam, where part of the site has been excavated in the last decade. This was a place where Jews would take a ritual bath on the way up the hill to the Temple Mount. It is the site where Jesus told a man to wash his eyes after Jesus had healed him by rubbing his eyes with a paste of mud. 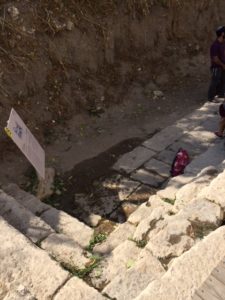 A recently discovered section of the Pool of Siloam

From there we went to the Cenacle, the traditional site where Jesus shared the Last Supper with his disciples. It is located on Mount Zion in Jerusalem, near the early 20th century Abbey of the Dormition. The tomb of King David is thought to be situated in a building on the same compound, so the site is important to both Jewish and Christian visitors. 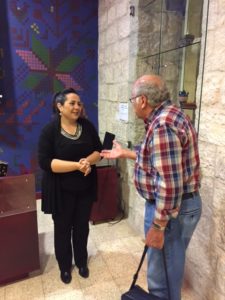 Ken Seitz speaking with Angie at the cultural center

We bought our lunch at the site of a large model of the city of Jerusalem as it was in about 60 A.D. It helped us visualize the immense temple built by Herod shortly before the birth of Christ.

From there, we went the Yad Vashem Holocaust Museum. We were sobered as we viewed the testimonies of those who survived the systematic attempts of the Nazi regime to eliminate the Jews as a people.

On Friday, we drove through Jerusalem and its environs into Bethlehem. After passing the checkpoint, we drove through narrow streets to arrive at the cultural center associate with the Lutheran Christmas Church, where Mitri Raheb is the senior pastor. Mitri greeted us, and then introduced us to a colleague named Andrea who shared about the ministry of the cultural center. 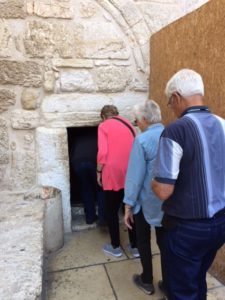 Entering the small door at the Church of the Nativity

She shared a passion for cultural expression which is helping to replace rage with creativity and hope, for children to older adults.

Along with throngs of others, we visited the Church of the Nativity in the heart of Bethlehem. We observed a massive restoration project of the building, where workers meticulously are removing centuries of grime from the tall columns in order to restore their original colors. We saw the worship centers for the Catholic, Armenian, and Orthodox faiths, crowded next to each other, each with their unique emphasis. The Catholic church is the scene of an annual international broadcast of a worship service celebrating the birth of Jesus at Christmastime.

Jewish boys on the Sabbath

From there we went to the Shepherds’ Field in the area of Beit Sahur, not far from Bethlehem. Two worship spaces mark the place where, according to tradition, angels announced the birth of Christ to the shepherds tending their flocks at night. The Shepherd’s Field Chapel has a worship space at a cave like the ones where shepherds could protect their sheep at night. The Gloria in Excelsis Deo Chapel has three murals depicting the story in scenes, including a picture of the shepherds rejoicing as they returned to their fields after having seen the Christ child. While we were in the chapel, a large group of tourists sang Christmas carols. The same site has the remains of an early home on the hillside, pointing to the presence of an ancient village in the area. 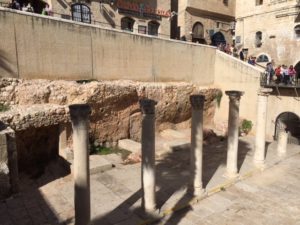 Ruins of a first-century Roman street and shops

We drove back to the hotel as the sun was setting, so we saw Jewish families walking to places of Sabbath celebration. The Sabbath had already begun when we met with Mennonite Central Committee (MCC) representative Snezana Andjelic. A native of Serbia, she works alongside her husband to help build peace between Israelis and Palestinians. They came to Israel-Palestine to share some of the lessons they had learned from the war in Bosnia. Our group was moved by the testimony of the ways in which MCC works with local partners to bring healing and hope in the current conflict through education, development, and advocacy.

Entering the Church of the Holy Sepulcher

On Saturday morning, we walked through the various quarters of the old city of Jerusalem, observing many devout Jews going about their Sabbath day activities. We visited the Church of the Holy Sepulcher, which memorializes the crucifixion and burial of Jesus Christ. Thrones of people showed their devotion inside the church in a variety of ways, such as lighting candles and kissing or stroking the stone which lies over the burial place.

People praying at the Western Wall

We walked through crowded pedestrian streets lined with merchants selling their wares. We also walked the Via Dolorosa, the road which Jesus was forced to take on the way to his death. On the verge of leaving the old city, we went to the Western Wall, where we observed many Jews reading scripture on the Sabbath.

We ended the formal tour of the city by visiting the Garden Tomb, a place of respite which purports to be the place of Golgotha where Jesus was crucified, and the burial place nearby. It was a joy to celebrate the resurrection of Christ along with a crowd of people from many other nations.

After dinner, we ended the day with some reflections on our trip and sharing of communion. 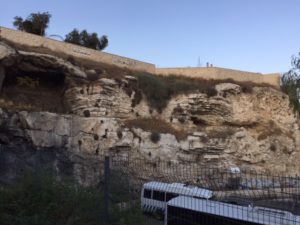 The place of crucifixion at the Garden Tomb