Jericho, the Dead Sea, and Qumran

Jericho, the Dead Sea, and Qumran 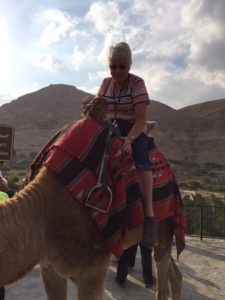 Colleen Haldeman on a camel 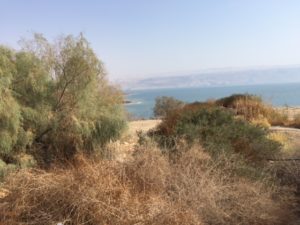 View of the Dead Sea

Today we left Tiberius to head south toward the Dead Sea, and ultimately to Jerusalem. That took us out of Israel into the West Bank, which is Palestinian territory. As we drove along the Jordan River, our guide presented history about Zionism and the sharp conflicts about land ownership in the West Bank over the last hundred years.

We drove through Jericho, an ancient gateway to the land of Israel. It was there that Zacchaeus got rich by collecting road tolls and taxes for the Romans.

We went to the Dead Sea, the lowest spot in the world — at 1,200 feet below sea level. It is also the saltiest body of water in the world, since it has no outlet, and the rate of evaporation is greater than the fresh water supply.

The water level has dropped significantly in the last decades, since the water supply coming from the Jordan is steadily shrinking.

Several members of our group ventured into the sea to experience the unusual buoyancy of water with a 35% mineral content. It made no difference when the lake floor dropped out from below our feet, since we could float with little effort, even in an upright position with our arms straight up in the air. 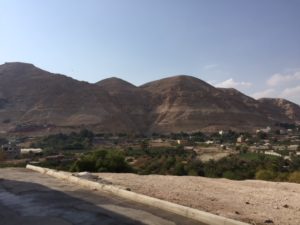 View of the Mount of Temptation

We ate lunch at a Palestinian restaurant in Jericho, and then went to a place nearby where we could view the Mount of Temptation. This is the traditional site where Jesus spent 40 days in the wilderness, and was tempted by the devil. One of our members also took a brief camel ride at that spot. 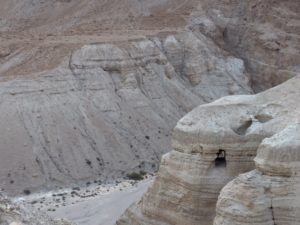 After lunch we visited Qumran, the site where Bedouin a shepherd boy serendipitously discovered a set of scrolls stored in clay jars in a cave for more than 1,900 years. These scrolls described the life of the Essenes, a religious community at the time of Jesus. They also contained older and more reliable copies of our sacred scriptures than we had up to that time. We enjoyed a brief tour of the ancient ruins where the Essenes lived, and saw the places where they took their ritual baths each day.

We left Qumran to drive to Jerusalem, and arrived there just before the sun set. Our guide led us in a Jewish ritual of blessing which is traditionally used when people undertake a new venture or arrive at a place after a long absence. We look forward to exploring this ancient city in the coming days.