First days in the Holy Land

First days in the Holy Land 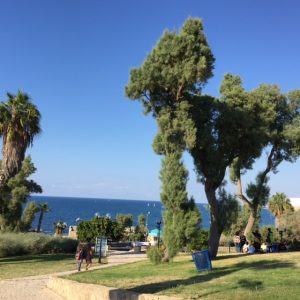 After the group arrived at the Ben Gurion Airport in Tel Aviv on November 4, we spent a couple of hours in a part of the city that is the ancient city of Jaffa, or Joppa as it’s called in the Bible. That’s where Jonah boarded a ship in a futile attempt to get away from God’s call to go to Nineveh. Much later, it was the scene of the Apostle Paul’s stay with Simon the Tanner, where he had a vision from God that led to the conversion of Cornelius the centurion. We had a lovely outdoor meal at St. George’s restaurant. The weather was perfect, with sunshine a slight breeze off the Mediterranean Sea. A short walk after lunch gave a picture-perfect view of the coastline, dotted with while sailboats against the blue sea.

On November 5 we visited Caesarea, the port and city constructed by Herod the Great on the Mediterranean Sea. Caesarea became a bustling Roman city that served as a contrast to Jerusalem, the sacred place for the Jews. We walked into the theater, which helped introduce Roman culture to the land of Israel. We also saw the hippodrome, and walked out to the site of Herod’s seaside palace. Herod was clearly a builder. We also drove to the site of Herod’s aqueduct, which brought fresh water into the city from springs some ten miles away. 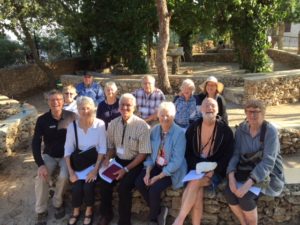 The group at the Carmelite church

From Caesarea, we went to Mount Carmel. We went to the Carmelite church, where we had a short outdoor service in a lovely spot with rows of stone benches. There we read the passage from I Kings 18 about the story of Elijah confronting the prophets of Baal. The Carmelites see themselves in the order of Elijah; they have a large statue of Elijah in the courtyard. After the outdoor service, we walked up the outdoor stairs to a deck which overlooks the Jezreel Valley. A major north-south highway is under construction there, following the ancient trade route called the Via Maris. It is the site of Megiddo, the place where some say the Battle of Armageddon will someday take place.

We drove from Mount Carmel to Haifa, the city where our guide Yossi Tal lives. It is a modern city with a large university. We drove to a lookout point which oversees the Haifa Bay, a lovely view. We could all the way to the border of Lebanon, which is closed to traffic because the two countries are at war. 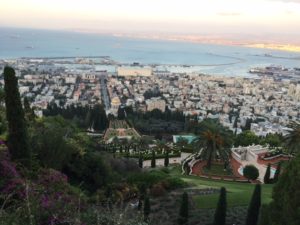 A lookout over Haifa Bay

The lookout point also oversees the “headquarters” of the Baha’i faith, with a lovely mausoleum and terraced gardens. They have no group leader or worship centers, but built this site to show life at its best.

We ended the day with supper at the Nof Ginosaur Kibbutz, which borders the Sea of Galilee. Some of us walked to the lake after supper to drink in the view of the full moon shining on the lake, with the lights of Tiberias and other villages showing across the water. A lovely way to end a full day.