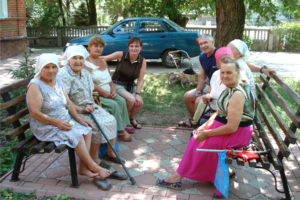 What a couple of days it has been.  We returned to the vast Molotschna settlement yesterday but for a very different day.  First off was a small village where people invited us in to their village store as they were (already!) celebrating the 9 May anniversary to the defeat of Nazi Germany.  Along the way they and countless others told us about the hardships that seniors face in the country-side, of the large-scale movement of the youth to the cities, and of the lack of a social safety net for those left behind.

We then visited a former Mennonite church that has been restored to use as a Ukrainian Catholic church (restored by Mennonites who financed it for that purpose) and spoke with the grateful priest who serves there.

Our noon meal was at a former collective farm that is now run as a cooperative.  It is a beautiful setting and a terrific opportunity to visit with the local farm manager who spoke of the transitions underway in Ukraine.  It should already be clear that TourMagination is about much more than heritage; it also gives the opportunity to engage with the present, and always to be mindful of the people who now live in this beautiful land.

More villages followed  before we headed home.  Tour leader Len Friesen (me!) was particularly moved with a visit to the Stulnevo railway station where his mother, uncle and grandmother were stranded in fearful terror for several days in 1941 as the battle between Nazi Germany and the Soviet Union literally took place in front of their eyes and all around as these massive armies faced off on either side of the field.  Somehow, by God’s grace, none of the Mennonites were killed.

Today has been a relaxing day.  Highlights included the chance to visit with MCC Ukraine personnel and hear of their important work in this land; others went with local Boris Letkeman who continues to extend a hand of Christian service to the local population on behalf of the local church; some walked along the streets of this fine city, visited its vast daily market and did a bit of souvenir shopping.  We leave for Russia via Austria within a handful of hours, and after our final evening meal.  Who can believe how the time has flown?  Who can believe how fortunate we are to be here?