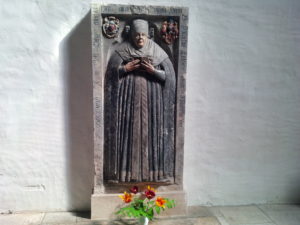 On Thursday morning we traveled to Torgau. This city in Germany was important during the Reformation as it allowed the first Protestant designated worship space. We visited the Castle Chapel and sang a song in this worship space.

We visited St. Mary’s Church in order to visit the grave of Martin Luther’s widow Katharine. She died on December 20,1552. With the outbreak of a plague in Wittenberg, Katharine traveled by carriage to Torgau. Near the city gate she was injured in a carriage accident and died. Her body was buried in St Mary’s Church.

In Dresden we spent several hours in the Cathedral square. The highlight was visiting the Baroque Cathedral (Frauenkirche), Lutheran Church of Our Lady. 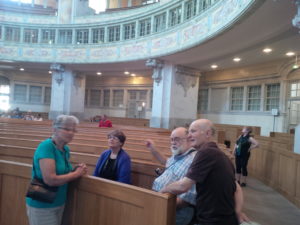 Carol & Lorne Smith‎, along with Nancy & Bob Kelly, inside the Frauenkirche

At the end of World War 2, Winston Churchill had ordered the firebombing of Dresden in order to teach the Germans a lesson. It took 193 million Euros in order to-rebuild the Frauenkirche to its former glory.  66 percent of this was raised as charitable donations. The Frauenkirche is more elaborate than the Catholic Cathedral in Dresden. Bob Kelly said he has never seen a more elaborate Lutheran Church. The group discussed the ethics of the conduct of war – the Just War theory and Pacifism – following our visit.

Friday the highlight was the beautiful drive from Dresden to Marburg. We were amazed by the large prosperous fields in former East Germany. Most of the villages have been restored and as our coach driver JP says, “The roads are better than West Germany.” Germany has focused its resources to bring East Germany up to the German standard. They did a great job.

At the Marburg Castle we toured the Reformation display. A highlight was studying the painting remembering the Marburg Colloquy. Philip I of Hesse was active in promoting the Protestant cause and instrumental in forming a Protestant alliance. In October 1529 he invited the two Reformers along with other teachers and preachers to the Castle for the Colloquy. As we studied the painting we reflected on the energy expressed in the painting by the Reformers. They were discussing the place of the church in society. They were each articulating their faith. They were able to agree on 14 points but were unable to agree on the Lord’s Supper. Someone asked, “Where today do we find this level of passion in our church life?”

Yesterday we stopped first at Limburg an der Lahn. This city was made famous over the last decade by the Bishop of Limburg spending excess Euros remodeling the Bishop’s residence. The Bishop was removed to the Vatican by Pope Benedict. We walked by the residence on our way to visit the Cathedral. It is a pilgrimage centre.

We also enjoyed sitting in the square enjoying coffee and pastry, watching the activities of the residents and tourists. The half-timbered houses made for wonderful photos. 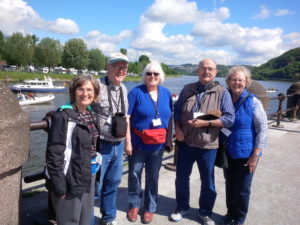 The Taylor family in Koblenz

We stopped in Koblenz to view the confluences of the Moselle and Rhine Rivers. The weather made for a great day for the Rhine River cruise from Boppard to Oberwesel.

In Mainz we stopped at the Gutenberg Museum. Johannes Gutenberg was operating a printing press in 1450. Gutenberg developed moveable type cast from metal and developed a press which made maximum use of the type. He also printed an edition of the Bible. Bob informed us that historians agree the Reformation was greatly affected by the invention of moveable type. Unfortunately we arrived a little late and the doors were already locked. We could only take pictures of a press through the windows.

However, we were more blessed at the Mainz Cathedral. The 120-voice St. Alban Singers were performing a concert in the Cathedral at 5:00 pm. We enjoyed 30 minutes of the concert. Bob informed us that this was a farewell concert to their director. It was a performance of church music as it would have been sung in the 1600’s. Church music also had an influence on the Reformation. We heard three motifs by Heinrich Schultz (1585-1672) and Johann Sebastian Bach (1685-1750).

At the bus park we took photos of a section of the Berlin Wall on display. Our tour has come to an end. We have been blessed by safe travels, challenging and enriching conversation, good food and fellowship.

May God be with us till we meet again.