We have just completed our third day of this tour to Central Asia. Having thoroughly enjoyed two days in Istanbul, Turkey, we arrived in Tashkent, Uzbekistan, early Wednesday morning.

The day unfolded with numerous sites unique only to Uzbekistan. We visited the Monument of Courage, which is a memorial to victims of the 1966 earthquake (9+ on the Richter Scale) that devastated the centre of Tashkent, and honours the city’s recovery. Public spaces and meeting places are large here. Streets are wide and the city is very clean with citizens all contributing in many ways. The Muslim Centre is large, with a beautiful former madrassah. The Dridey mosque is impressive, as is the museum of the Koran. Much more could be said about this site. The bazaar, which is located at the intersection of crossroads of four directions on the Ancient Silk Road, provided a jaw-dropping feast for the eyes – meats, vegetables, fruits, such as we do not see in North America.

The afternoon took us to a museum featuring the art of suzani embroidery, a decorative textile made in Uzbekistan and other Central Asian countries. Adding to the uniqueness of this site was an oak tree planted in the 1800’s, which coincides with the years of the Great Trek that arrived in Tashkent in 1881 and which route we are travelling.

Independence Square marks the independence of Uzbekistan from the Soviet Union in 1991. The square is very large, beautiful in design, with many trees, flowers, wide walking paths, and an installation of approximately 1-2 city blocks of fountains.

Prior to dinner, we made an incredibly poignant visit to a special place in the centre of Tashkent.

To describe this, I am going to speak in the first person. I am Joanne Penner Herron, from Lethbridge, Alberta, Canada, and the great granddaughter of Elizabeth Unruh Schultz. My great grandmother was a member of the Great Trek of Mennonites (1880-1884) that travelled from Molotschna in Southern Russia to Central Asia. She was 12 years old. They hoped to find a peaceful refuge to live out their faith, protect themselves from encroaching Russification in many areas of life, including military construction, and to provide a refuge for Christians escaping the Tribulation.

Their wagon train arrived in Tashkent in December 1881 after eighteen weeks of travel. 125 wagons, with 80 families, met others in a smaller group in a campground in Tashkent. In her personal journals, written during the Trek, my great grandmother Elizabeth describes their nine-month stay here. She identifies some landmarks clearly, accompanied by the different activities of daily living.

So, the dream and hopes of tracing her life here using her journals hung before me, tantalizing and emotional.

Well, thanks to our incredible tour guide John Sharp, we found their “camping home” this evening! 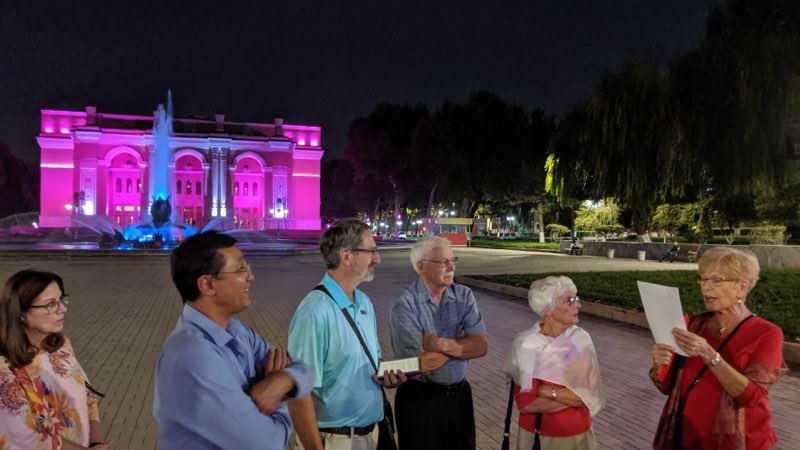 Joanne sharing with the group in Independence Square