On Wednesday we left Szczecin early and sailed across a big lake to the Usedom area, landing in the port of Kamminke.  We then got on our bikes and headed out exploring the area. One of my highlights was a WWII vintage aircraft which took off very close then buzzed the sky around us, diving and turning sharply, very cool.  We biked to Ahlbeck, a tourist town on the Baltic Sea. It was a cooler day so no one went swimming from our group, but many people were.  We had lunch here and I took the liberty to ride along the coast. The bike paths are fantastic and this area’s homes and hotels are really nice. This area is by far the highlight of the trip for me. 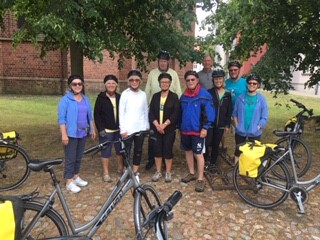 After lunch we cycled to Swinoujscie which is a touristy area, very busy. It is where the border of Germany and Poland intersect. From there we cycled around the island of Usedom from Poland back into Germany ending up at the dock in Kamminke. This is a fishing village and they were smoking eels and halibut. The restaurant there was very busy .

After a nice dinner on the Merlijn, most of the group took a leisurely walk then returned for the evening.

On Thursday morning we left from the port of Kamminke and very shortly we stopped at a cemetery honouring townsfolk who died in the WWII, the memorial interpreted loosely means “mothers mourning their loss and do not let it happen again.” 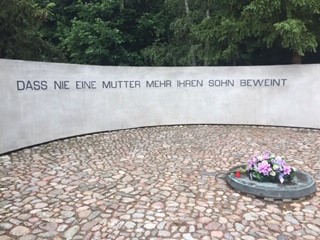 From there we biked at a leisurely pace heading towards Karrin which is just before the start of the Penne River, which is where the boat would pick us up. We stopped for lunch and coffee and cakes in Stolpe Schoss, a quaint little village. The bake shop there was incredibly busy with non-stop customers, and it was very interesting to observe.

After lunch we stopped in Usedom where we dispersed to explore the community. We then went on to Katrina and met the boat.

Lia the guide and I decided to bike further as it was a light day, so we rode to Anklam, a bigger town along the river. We viewed the city gate then after buying a quart of fresh cherries 🍒 made our way to the river to await the boat. We got on about 6pm then sailed on to Stolpe and parked for the night. After dinner we took a stroll in the little community, where we met some other tourists and exchanged stories. 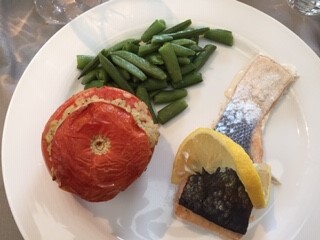 Main course at dinner on Thursday

Today we sailed to Jarmen where we unloaded and started biking 🚴‍♀️. It was a gentle ride today but everyone enjoyed less hills and smooth roads. We had lunch at a lookout tower over a huge wetland that was home to hundreds of bird varieties. After lunch we continued on to Demmin where we visited an old Cathedral and the city gates. We saw a father bring his daughter to city hall in an old horse and carriage, really neat. Apparently Germans must be married at city hall, and then they can have a church wedding if they decide. 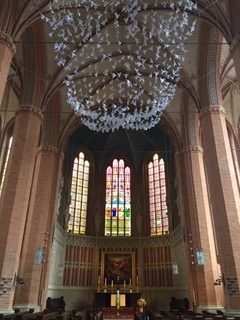 We then rode on to Verchen, situated on the north end of lake Kummerower, boarded the boat and sailed on to Malchin. A short but enjoyable ride on the water.

Friday night is Captain’s Night so we will see what that entails.