TourMagination’s Celebrating 500 Years of the Reformation & Life of Martin Luther began in Frankfurt on Friday. At our welcome dinner at the Mercure Hotel the conversation around our three tables was intense as our tour members from 4 countries learned to know one another. (United States, Australia, Luxembourg and Canada). 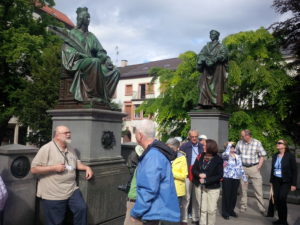 On Saturday morning our first stop was the Reformers Monument in Worms. At the monument, Martin Luther is surrounded by other reformers who predates him. The monument explains how he is building on the previous reformers. It also reveals the support he received from the political authorities and the state.

We enjoyed walking through the gardens where the building would have stood where Luther stood trial during the Diet of Worms.

Later in the day we enjoyed a visit to Speyer and its famous cathedral. It was Saturday so the pedestrian street was filled with tourists as well as market vendors. Visiting the Heidelberg Castle gave a marvelous view of the Neckar River. We also took the opportunity to visit the Pharmaceutical Museum with its famous painting of Christ as a pharmacist.

This morning in our drive to Rohrbach Lutheran Church for worship we drove through the region of the Kraichgau. From the Steinsberg Tower we could see over this rich farming area. Many Mennonites in North America trace their roots to the Kraichgau.

We were warmly welcomed by the Lutheran congregation. The pastor based his sermon on Psalm 98. Bob Kelly, Hans Borch and Judy Wilson shared some insights on the bus later: “Music reveals what is in our soul. We should become more like children rather than absorbing the cares of our world.” In Matt.21 Jesus cleansed the temple. The pastor noted that children singing helped reveal what the adults could not understand. 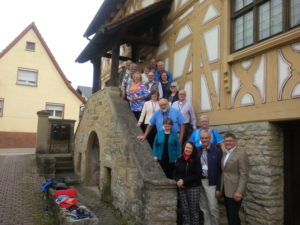 Group at the Steinsfurt cellar

Mr. Hecker, the local historian, met us at the historic cellar in Steinsfurt. He reminded us that in 1661, 53 persons were arrested here during worship. He read the names and the amount of the fines against them. The Mennonite farmers informed the authorities that they did not want to leave the Kraichgau region. Yet the fine for gathering to worship was heavy taxation for them to bear. If they weren’t able to financially make ends meet due to continued heavy taxation they would leave the community rather than give up worship. Some tolerance was granted and migration did not begin until 1709.

We sang the hymn “I Sing the mighty Power of God” in the cellar. Deborah Ann Taylor said following our gathering, “This was so meaningful. If nothing else happened on this tour, this made the trip to Germany worthwhile. This was very real to me.”

This afternoon we enjoyed free time to explore Rothenburg ob der Tauber. What a great way to enjoy Sunday afternoon, exploring a walled medieval city and drinking coffee and eating German pastry at an outdoor cafe.