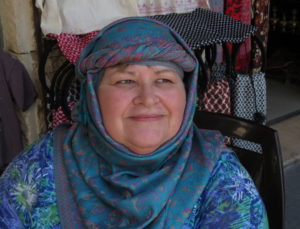 With three full days of touring behind us, the Jordan-Palestine-Israel pilgrim band is starting to feel at home in this part of the world. Our stops so far have included the best-preserved provincial Roman city anywhere (Jerash), the citadel-city mountain where the Old Testament Ammonites were based (in Amman), ruins of the palace-fortress where Josephus says John the Baptist died (Machaerus), and the World Heritage site of Petra (the “Indiana Jones” city carved out of stone).

Hard to absorb it all! The entire group of 17 (to become 18 on Tuesday) has been in good health, good spirits, and plenty of humor. We also feel deep connection with the biblical narrative, reading scriptural accounts related to each place we see. That process reaches into the soul and connects us with each other in faith and prayer. 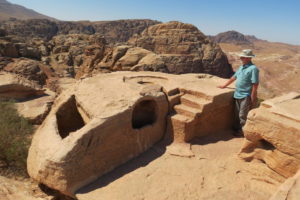 Hank Landes was one of two group members who trekked to the top of a mountain in the heart of Petra to see this Nabatean High Place of Sacrifice that was created and used at about the time of Christ.

Going through the desert today on the road from Petra to this night’s hotel at the Dead Sea reminded us of the harsh climate and terrain that the Children of Israel traversed when they came the same way toward Canaan. Tonight we read Ezekiel 37—the valley of dry bones—and reflected on places in our own lives and in this region of the world that need God’s healing and restoring grace. The Dead Sea valley—lowest spot on earth—may be the very valley Ezekiel had in mind.